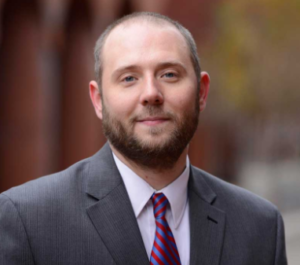 James focuses his practice on representing clients in civil litigation, including personal injury, commercial litigation, class actions, and appellate litigation. His practice includes motor vehicle accidents, medical malpractice, wrongful death, natural gas litigation, commercial real estate litigation, and other complex matters. He also represented the 2011 Pennsylvania Legislative Reapportionment Commission. In his practice of appellate litigation, James has represented clients in appeals before the Pennsylvania Supreme Court, Superior Court, and Commonwealth Court. He also has experience in criminal defense and DUI defense. James joined the law firm of Del Sole Cavanaugh Stroyd in 2010 after he graduated from law school, then worked at Logue Law Firm from its inception in 2012 until 2015, when it became Vari & Logue. Thereafter, he became an Associate with Quinn Logue, LLC.

James attended law school at Duquesne University School of Law, where he graduated summa cum laude in 2010. He was a published contributor and editorial board member of the Duquesne Law Review, serving as Executive Criminal Procedure Editor and Associate Comment Editor. He was also a published contributor and senior staff member of the Duquesne Business Law Journal. James received the Honorable Carol Los Mansmann Excellence in Writing Award, the CALI Award for Excellence in the Study of Estates & Trusts, and the CALI Award for Excellence in the Study of International Law. He was also the president of the Duquesne Student Chapter of the Federalist Society. While in law school, James worked as an intern for Judge Thomas Hardiman of the U.S. Court of Appeals for the Third Circuit and was a research assistant at the Potomac Institute for Policy Studies in Washington DC.