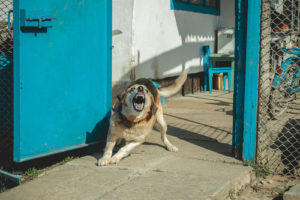 Two sheriff’s deputies from Indiana were attempting to serve a PFA (protection from abuse order) to a 44-year-old man when they were first bit by a pit bull and then by the man in the ensuing struggle. The deputies went to the home to serve the order against him for allegedly abusing his wife who was also at the scene when the incident occurred.

It was after receiving the PFA that the man refused to leave the house which led to the following events taking place. A fight broke out between the deputies and the man which in turn caused a significant dent in the wall of the home. After succumbing due to losing the fight the man then signaled his wife’s pit bull to protect him from the deputies who then bit the officers multiple times even drawing blood. In order to protect himself a deputy fired a shot at the dog only grazing him, but ultimately they were able to tase the animal which stopped him in its tracks.

The woman who was the owner of the dog stated that her canine was normally very docile, yet the husband knew how to command the dog to protect him which is the reason the dog acted in such a violent fashion. She also claims that she was involved in a very abusive relationship with her husband which was the reason the PFA was ordered to begin with.

During the encounter, the deputies were also bitten by the husband who refused to leave the home. The officers did suffer bite wounds from both the man and the dog and were treated for their injuries, and although grazed by a gunshot and tased the animal was able to survive as a vet was able to retrieve the taser tips from the animal. The man is currently in Indiana County Jail on a $75,000 bond charged with felony aggravated assault.

If you or a loved one find yourself the victim of a dog bite, or otherwise injured due to an unusual situation such as this, you will need a qualified personal injury attorney from The Law Office of Quinn Logue to help get the compensation you’ll require for expensive medical bills, lost income, and pain and suffering.

Call now, or fill out our convenient online form to begin discussing your case today.